skip to main | skip to sidebar

Alien vs 9pek9bo - The abduction protection

Upon my reappearance after MIA for a month here, I was amused by the following comments from my blogger friends-

tsp- “thought you went missing in action to some planet mars...haha..”

JoZefoo - “you're back! i tot you were kidnapped by aliens!”

Mafoolat! These fellas must be soothsayers of the 21stcentury!
They could not be any more ‘chun’….. I was indeed abducted by some alien beings just after reading and publishing their ‘prophecies’! 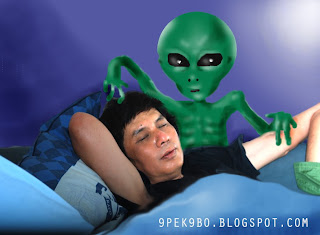 Like all other alien abductions, leempek was taken aboard their motherfarker-ship for interrogations and studies as a sample inhabitant of this planet Earth. (don’t blardy ask me! It’s not my fault that even with those big bulky eyes they were so blind in their choice of sampling .. ok?)

There, like a guinea pig, leempek was poked and prodded all over (except the place where Sai’Foo likes it best of course!)

Contrary to those fierce and hostile stereotyped alien characteristics we see in movies, my abductors were NOT anything like that and they didn’t even need to wear those' NAnti Rasuah’ buttons to convince me that they were such a good, friendly, courteous and very well mannered lot.

Naturally, I felt comfortable and even gave them my best smile asking, "Hey guys! You got Facebook or Friendster or not?"

Me: Why should I be?

Alien: We're Martians you know? ... you have been abducted/arrested/kidnapped by us and may not be able to see your family or even the planet Earth for that matter again! Aren't you scared and worried?

Me: Ohhh!Don't be silly..It's nothing that scary! Back where I came from, people abduct or arrest you to protect you...Nice leh? hahaha! You don't believe you go and ask that 'Hamik Sai' fler.

Me: Ohhh! I'm a MereyShian! 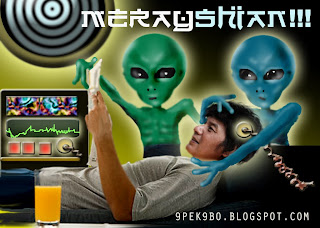 Alien: “MeReysHiAN? Oh My hOLy GReeN MARtiAN sHiT!!!! Let's not waste our time here..these species aren't intelligent enough to be a threat to our planet”

They then stamped me with this and threw me out of their motherfarker-ship immediately...

and I woke up on my sofa unharmed except for my legs, which are now a little longer after the pulling just like yours... hahahaha!

what on earth was that...muahahaha...so u really been to some planet mars...and too bad you're not the one they looking...haha..

RUN WITH THE WAVE said...

Hey there! Come and join us for a BBQ buffet at the beach in Penang this Christmas with watersports activities included! Sign up now! Check out my website at www.runwiththewave.com Thanks!

Pls feel free to leave a word or two here but DO NOT abuse it as your BLOG ADVERTISING BOX!!!